The little Caracal that couldn't

"It's going to look pretty good, then, isn't it," said War testily, "the One Horseman and Three Pedestrians of the Apocralypse."
-- The Four Horsemen of the Apocralypse encounter unexpected difficulties
(Terry Pratchett, Sourcery)

Hunting has been slim in the area, between my neighbours operating a scorched earth policy and there no longer being a frigate magnet, I'm struggling to make ends meet.

Keira has stormed off in a mood as there is no longer a steady flow of ISK from customers to Gusandall and I've not heard from her in a long ole while.

Kenny has also been missing, no idea where he's off to but he's still got some market stuff brewing with all our loot, so hopefully he hasn't scarpered with it.

Tough times for NovaKane Incorporated and You've got RED on you

So when a Proteus shows up on scan in Eifer, the three of us that are left spring into action to bushwhack it in its mission. The covops pilot drops probes deep out of onboard scanner range, drags them in and out of scan range in quick sweeps as not to leave them scannable for too long and spook the quarry.

Soon a 100% hit is returned and the probes are dragged over 100AU away, left in space just in case , as the covops warps in to setup the final stages of the ambush, I board my weapon of choice, a Caracal

A Loki with skirmish links moves into system, extra range was key to this being a successful hunt.

I undock from Gusandall and warp to the Eifer gate, the Loki reports in place and ready to drop cloak and activate links, but the covops reports the Proteus has warped out, so I warp away to a safe spot and wait. This is a lucrative mission from a level 4 agent in Emolgranlan, the Proteus would be back and after a fair few minutes, he was.

So the whole process of setting up the warpin would begin again, but with the Loki in place, I had exceptionally long range on my point, so as soon as the covops reported within 40 clicks I jumped in and warped to her position. I land under 40km and immediately lock the Proteus up and apply the loving caress of a warp disruptor to its warp drive but still have a little work to do, I close under MWD to within 24km and open up with a full flight of Nova missiles which start to tear great big chunks out of the Proteus' Shield and then armour, he starts to repair it but I'm in control, out of range of his blasters as he sends a wave of small drones to try force me off. I'm taking fire from the mission rats as it seems they take an instant dislike to warp disruptors being used in their presence.

The Proteus isn't long for the universe and soon he explodes... Victory...

There always seems to be a but as of late...

I had switched to my drone overview as a precaution to how the Proteus might be set up. Not checking to see what else had warped in I had taken my cue from said overview and it was only then that I noticed that not only was I tackled, but I was scrammed, no MWD, a friend of the Proteus in a Loki had warped in or decloaked, doesn't really matter as my Caracal was in deep trouble... Very deep trouble.

I engaged the Loki but it was too late, Had I been paying attention I might have had another kill but as it stood I was preparing to warp my escape pod out.

Good fight shared all round but I wasn't finished, I warped back to Gusandall and again, not paying attention, thought I was boarding a Hurricane, but as I undocked and warped to Eifer I noticed I was in a Maulus.

Anyways, this might be fun, I warped to the site as soon as I jumped into Eifer and the Loki was still there, scooping all the loot, so I engaged the Loki which immediately pissed off the Equilibrium of Mankind ships who turned all their attention to me. I started dodging fire as I could whilst making sure the Loki wasn't going anywhere, also had to navigate through and around some structures which could have caused me to lose range and transverse speed, which in turn would have made it a very sticky situation.

The damage from my drones and railguns were not enough to even dent the Loki's shields and after about half an hour I got bored and let him go, again Good Fights shared all round


I was a little gutted that due to my errors I lost a ship, and even further errors meant that even as I had another shot at killing the second hostile I failed.

I have now checked all my overview settings and it seems all the Strategic Cruisers were unchecked, certainly not something I would have done and I'm wondering if in some recent software update to my systems it was turned off accidentally, much like the Combat Battlecruisers not being checked. 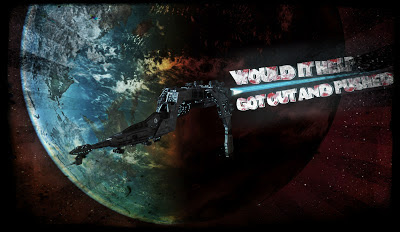 Don't be so hard on yourself! You still bagged a Proteus in the end. Sure you didn't get to loot it but it was an unlucky drop anyway.

Always wondered what could take down a T3, I guess I should stop being so scared of them and just give it a go.

I'm fairly certain that recent patches have in fact messed with overview settings as I had to go through each of my tabs and re-click atacke BCs and Blockade runners. If thats any consolation.