Carriers and POS oh my, oh my

Yesterday was interesting to say the least, not sure if I recall things correctly as my brain shut down halfway through.

Started off with a bit of Rifter hunting in my favourite haunt. I spotted a Punisher class frigate on scan and tried to narrow him down but to no avail, so I gave Keira a call and asked her to come work her magic, shortly after she entered system and started scanning she got a hit on the Punisher. She warped in to set up the ambush and yelled in comms "CYNO LIT"
Ooh, a cynosaural field, the thing you jump to, with a capital ship that is. The Punisher was totally imobilised as lighting the cyno drains ships energy for approximately 10 minutes, know ing this I warped in and engaged the sitting duck, I popped him and his pod but not before a Chimera class carrier had jumped in. Oh well I'm only in a Rifter so I layed down a tackle and orbited at 18km just in case he was packing smartbombs.

While this was going on both Keira and I were asking in various intel channels if anyone was available for some action, slowly but surely the local pirate community woke up. I was taking heavy damage at this point from fighters as I was trying to conserve cap and keep the warp disruptor active. I popped very shortly after we started forming a fleet but got my pod out and headed to HQ to grab something more robust, KARMA Baby, let's get it on.

Keira was holding position above the carrier and provided a spot on warp in for the gang as it was forming, we had managed to amass eight pilots, one of whom was bringing a dreadnaught, the Ammar Revelation.

Not a massive force but one more bloodthirsty than any I've ever seen.

The Chimera was tanking us comfortably when our dread entered system and immediately engaged siege mode and opened up with its massive guns, we were being neuted by the carrier and targeted by it drones and fighters, experience has tought us that we have nothing to fear from theses nuisances but we lost point and the carrier warped away, Grun in his vagabond followed and tracked him down to a belt, the gang jumped after and engaged except our dread who was in siege mode and couldn't move. Again it was a case of trying to hold points and trying to evade the fighters, he was effectively neuting our ca so we were losing points by mods shutting off and getting out of range evading the fighters. Once again the carrier warped out, we were cursing our luck when fortune truly shined on us, the carrier had logged off with aggro.

Keira immediately started working her magic and scanned the now unmanned Chimera, the massive signature radius of the carrier made it very easy and soon she had vectored us in and we went to work. Without the pilot the tank of the Chimera was now innefective and without much hassle and without the need of the dread it popped, the pod insta warped away but Grun's vaga probed it out very quickly and popped it like a can of Pringles. 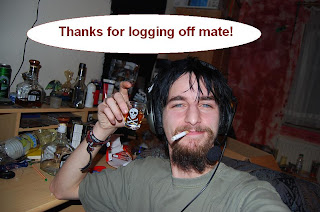 This picture was forwarded to the now Chimera-less pilot

A good kill and definitely one of opportunity.

The rest of the day involved some things I'll never do again, POS Shooting is not for me along with some strange gang mates later on it defintely wasn't one of my better days even though it showed so much promise later on.

I did a bit of solo roaming later on and almost got a Caracal but he got out of range.
Disappointed I headed home and headed straight for my bunk.

I dream of better days