"Chain letters," said the Tyrant. "The Chain Letter to the Ephebians. Forget Your Gods. Be Subjugated. Learn to Fear. Do not break the chain -- the last people who did woke up one morning to find fifty thousand armed men on their lawn."
-- (Terry Pratchett, Small Gods)

"A GILA ON SCAN IN EIFER, WAKE THE FUCK UP, I HAVE HIS POSITION, ANGEL RED LIGHT DISTRICT"

I board Sgt Detritus, a Harbinger class battle cruiser and head on over, jump into Eifer, warp to my associate and warp into the complex.

The Gila pilot greets me in a strange tongue, but then speaks common to me.

He warps out before I can get in range of my tackle. Well, I'm not here to just chillax, so I warp to a safe spot off scan from the complex and wait for my associate to report the Gila back at the gate. He does go back to the gate, greed a prime motivator in the universe and I warp back to the complex.

He warps out as soon as I come out of warp and heads to highsec, I take this as my cue to go back to Gusandall and grab something that the Gila pilot might find a bit more palatable, A RUPTURE.

I head on back to Eifer and jump in just as the Gila pilot does the same, but by this time, my cousin Kenny has started to run the complex in his Tengu
EVE System > Channel changed to Local : EiferBrian D'Illusion > ffsBrian D'Illusion > give me back plexKane Rizzel > come and take it

I try tempt the Gila to warp in and engage, but I think my enthusiasm may have made him even more weary of my intentions.

And on that note he left Eifer, never to return

So no fight, or kill and a few rather choice words about my character :(

I would later engage in a battle of Ruptures with Dian Lung of The Black Rebel Rifter Club.
It was a close range brawl, in very similar fit Ruptures, a few differences I think turned the tide in my favour, plus Dian had loaded Barrage earlier and forgot to change but it was a close fight none the less :) 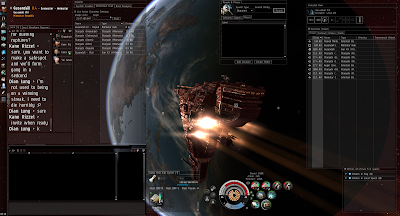 Thanks for coming down Dian.

STOP BLOCKING YOUR CHANNELS AND SHOW YOUR DISHONOUR FLEET OF ALT LINKS!