Just a quick note to say I'm not dead.

I'm moving house tomorrow and will be without internet until about the 13th when I get back from a short break in Geneva.

When you can flatten entire cities at a whim, a tendency towards quiet reflection and seeing-things-from-the-other-fellow's-point- of-view is seldom necessary.
-- (Terry Pratchett, Small Gods)

Finally, my systems are back online and hopefully all technical difficulties experienced thus far this year will be a thing of the past.

Now if Only I could find something to kill. Other than a Shield Extender Rifter and a poorly fit mission Rifter kills in Gusandall with the Succubus, my thirst for blood went unquenched.

There was a slight glimmer of hope when an obvious bait Abaddon started engaging alliance mates outside the station, I undocked in my Armageddon and engaged, cyno goes up and in jumps an Archon carrier, I'm heavily neuted and now capless. Kurtz undocks his Archon and reps me. With this going nowhere we decide to push the escalation they so obviously want and I dock to grab something shinier, the Bhaalgorn. This was enough for them to jump in another Archon, a Thanatos and a dreadnought (either a Rev or a Moros, can't remember now) and joined by a lone Vexor.

With Kurtz' Archon easily repping my Bhaalgorn it was clear this wasn't going anywhere, we were aware they could possibly escalate further were we to undock more Capital ships but to be honest we just weren't that interested. So we docked up and watched them waste more fuel by jumping out.

Hotdrops suck by the by.

I would later chase a Vengeance and a Rifter in my own Rifter but neither pilot seemed interested in making my acquaintance.

A rather quiet return to action but hopefully things will pick up.
Posted by Kane Rizzel at 19:01 2 comments:

Kids! Bringing about Armageddon can be dangerous. Do not attempt it in your home.

There will be light

Good news on the graphics card front, a friend from Arsclan, Krissea, has been kind enough to ship me a spare card for the cost of shipping, so hopefully I'll be back up and running around the 22nd of this month. I'll remove the dead 8800 GTX and plug in the 9800 GTX as soon as it arrives :)

As some have requested shots of my tattoos I dug through my images to find what I could. Picture quality isn't amazing as most were taken with a camera phone the day they were completed and it's awful difficult trying to get shots of your arms by yourself. I cannot for the life of me get a good shot of the sun dragon on my right shoulder blade. I can also not get a good shot of the text that is on the inside of my left upper arm as it wraps around too far (My artist has a collage of three shots that shows it of well but he doesn't have them online) 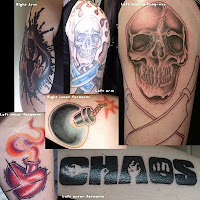 My arms are a work in progress and will eventually be full sleeves as time and inspiration allow. Each bit of ink has specific meaning to me and I have never felt the need to justify them to anyone, least of all my family.

Work on my right outer forearm and right wrist commences on the 6th of April, I can barely wait.
Posted by Kane Rizzel at 15:23 5 comments:

[OOC] From Bad, to Worse

Seems 2010 is starting to look like one fucked up year for me, EVE and gaming in general.

Got back from a club last night, turn the gaming rig on and it seems my graphics card has followed the Raptor drives example and gave up on me. So... No PvP for the foreseeable future as I venture to replace it, if and when time and my budget allow.

Normally I'd replace it straight away but with various projects in Real Life™ this is just another cost that wasn't planned for. Between trips to Geneva and new tattoos it might take me a few weeks to get it sorted so until then, Stay Classy and fly reckless.
Posted by Kane Rizzel at 08:14 4 comments:

It's time to go back to the good old days, flying things that others consider unconventional.

The Succubus is one of the most feared frigates ever to harrow the spacelanes and asteroid belts of civilized space, and with good reason: tales abound of its superiority over ships twice or three times its size. Whether you believe this to be fact or rumor, the Succubus will still strike fear in your heart.

I got the hangar crew to take the dust covers off one of my favourite old frigates, pretty much unchanged since they came into service with only minor tweaks here and there. While not as popular as some of the other Pirate faction frigates in this day and age, the sharpness of her spiky bits are enough to drive grown men to tears.

Had a rather nice fight in Gusandall and I'll try and recall the events to the best of my ability.

A Rupture appears on scan, quickly tracked to belt 1-1 via my onboard scanner, I warp in at range, not wanting to get too close before I can ascertain more or less his fit. Of course the possibility that he is bait is nagging away at the back of my mind but hey, you know me, if it's a trap, I'm damn well going to spring it.

I barrel in, get lock and tackle. I mention on alliance comms I have a rather deadly cruiser tackled and that I am in a rather fragile frigate.

Rupture locks back and releases Warrior II drones, this is going to get sticky, but I'm in it to the end. Darthi comes in with a Pilgrim but lands quite far away, Aiko, as unconventional as ever comes in a Navy Issue Osprey of all things.

I hit half shields, the drones doing a number on my fragile defences, but the Rupture's buffer is starting to give way. Just then things get interesting, the Rupture's friends warp in. A Merlin, Taranis, Vagabond and another Rupture appear on the scene.

Really should pay attention to my Admiral Akbar senses more often but it's on now, Rupture goes down, I target the Taranis who has closed on me rather quickly, lasers pew pewing away, it explodes and the rest of the hostiles disengage and bail. Us being rather fail Pirates are not able to get points on the rest and they're able to get out just as another alliance member lands in an Ishtar.

Like I said, a rather nice fight and the battle summary doesn't quite paint the whole picture. I had the shakes again, for the first time in a very long time and it felt fucking great.
Posted by Kane Rizzel at 15:23 8 comments: