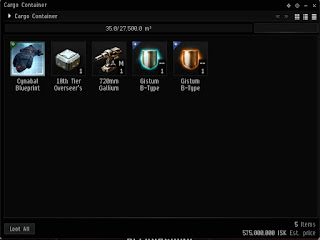 It was the sort of thing you expected in the Street of Alchemists. The neighbours *preferred* explosions, which were at least identifiable and soon over. They were better than the smells, which crept up on you.
-- (Terry Pratchett, Moving Pictures)

Welcome to 2020 everybody and the 12 year of A Pirate's Perspective.

Is it just me or are tanks on ships super powerful of late?

A quick hunt turned into a almost ten minute battle between a super tanked Tengu and my Stratios. Thinking it a trap, as I always do, I was hesitant but chose to throw caution to the wind.

I chose the Stratios for the added energy neutralizer ability, it has half the DPS of my Proteus but I felt the neuts would be more beneficial against an active tanked Tengu which seems to be all the rage.

I caught the Tengu running a Besieged covert site, waiting for it to clear most of the Gurista battleships before engaging.
With only one battleship left it was time, I closed, decloaked, locked target and launched drones, a flight of Ogre IIs. The Tengu initially tanked very easily, even with dual neut pressure, and it soon became evident that it wasn't going to break, even with the last Gurista battleship switching DPS between my Strat and the Tengu.

My tank took some strain when the Gurista focused on me but was never in danger of breaking. After what seemed an age I made th decision to call Keira in, asking her to bring overwhelming DPS in the shape of her Machariel, with the added benefit of a large energy neutralizer. She quickly docks and grabs her Mach, undocks and warps to the fight, loading Republic Fleet EMP rounds into the massive autocannons.

On landing she immediatley engages, with neut and cannons, and soon the Tengu breaks, and breaks hard, a glorious explosion, lighting the black of Gusandall.

The pod managed to warp out quickly, denying me the satisfaction of another corpse for the Morgue.
Looking at the mail I see a somewhat familiar module, which explains why dual medium neuts were having a tough time breaking the cap stability of a super tanked Tengu, a Thukker Large Cap battery, something that not only adds more capacitor but also helps negate energy neutralizers.

I'm saving up to buy either a Marshal or an Amarr dreadnought and this helps out a great deal.
Posted by Kane Rizzel at 11:04 No comments: