The Rifter of Kane

Over my many years of Piracy, there has been one constant... The Rifter.
No ship embodies freedom and aggression quite like it. From my first days as an immortal I always loved her lines, her class unequaled for many years. However, things have changed since I went away, no longer the King of the proverbial hill, the Rifter is just another frigate... But that doesn't mean I like her any less, and with this in mind the Kane Class Rifter that you see in my new banner was born. Her layout is a secret but for many of you, a quick glance at my losses, you will see my standard Rifter has not changed much at all over the years.

I undock the Cunning Man, feeling like a stranger in my own system, all the new faces and not a friend amongst them, but this doesn't stop me, nothing does. The family will not be involved in any of my future fights, unless for scouting and probing in the acquisition of others wealth, tech 1 frigates my toys, the Rifter my choice.

I head over to my spiritual home and home to many a great tale from yours truly, Eifer.
My lucky pounce has been set up very carefully, able to scan all the belts quickly and efficiently...

A quick scan shows another Rifter in the direction of the V cluster, I warp to the central belt of the cluster, which makes scanning the others easier and start to track him. He's moving very fast, only a matter of time as I start to follow his warps to belts...

I warp to belt 4, where he seems to linger a fraction too long and as warped space streams off my Rifter hull I see him engaging an Angel frigate. I start to close, The Angels and I don't see eye to eye, no honour amongst thieves it seems as they quite often attack me even as I try to save their dumb asses, but this Angel frigate doesn't stand much chance against my targets Rifter, but he does serve as a needed distraction and lasts just long enough for me to close within range of warp scramblers and webs. Both kick in simultaneously and I open fire, my target returns the favour and the dance is on as he tanks me rather handily whilst trying to neutralize my capacitor but he runs out of cap first, his repairer and neutralizer shutting down in unison, I'm not even in armour yet as I punch round after round of auto-cannon ammunition into his hull. Great big holes being torn into the Rifter's structure and it violently explodes. As I try to lock the pod and offer ransom, he warps out, 'good fight' shared over local comms.

Whilst waiting out my aggression timer, with my guns and tackle nearly at melting point, an Incursus class frigate appears. this gallente ship quite formidable in the right hands, so I warp to where he appears to be, only to see him aligning towards the Emolgranlan gate. I align towards the sun and assess the situation, a quick close up of his ship revealing blasters. This meant I would have to try and fight well into my falloff with Barrage if I were to stand a chance, and even then it would require some skill to pull it off as the pilot seemed familiar to me.

He slows and I take this as my cue to start closing by spiraling into range, not wanting to head directly at him, making it easier for him to slingshot on top of me, he turns and starts his own maneuvers to close the gap, both of us lighting our afterburners, mine only at 75% thrust. I can't afford to overheat my tackle or weapons as the heat would melt them, rendering them useless and ending this fight before it really gets started.
Incursus is getting closer, I turn away, lower my speed and let hem get close enough before turning ninety degrees as he gets into scram and web range, tackle glows green and we start shooting at each other, my Barrage rounds landing at 9km, whilst my shields start taking damage. He starts to close as the damage increases so I set full thrust and overload my afterburner as I imagine that's what he's doing to close under a stasis webifier effect.

He's tanking my damage well, this fight not going my way, I needed a little luck and I received it as his tank broke, seemingly out of cap, overloading his afterburner and cap hungry guns along with his obviously overheated repper doing to his capacitor what I was trying to do to his armour. He enters hull as my overheated afterburner, burns out the mod next to it, my warp scrambler, does he notice before it's too late?


No, he explodes and warp his escape pod out sharpish.

Again, 'good fight' shared in local and I decide to call it a night, it's hot and I could use a refreshing beverage.

[OOC UPDATE]
It has now been 26 months since I gave up alcohol, cigarettes and drugs, recently decided to go full vegetarian as I have been eating less meat and doing bits of research for a future project with my career. I also gave up sugar four months ago and have lost close to 22kg as a result, to celebrate this latest milestone I decided on another tattoo and started this: 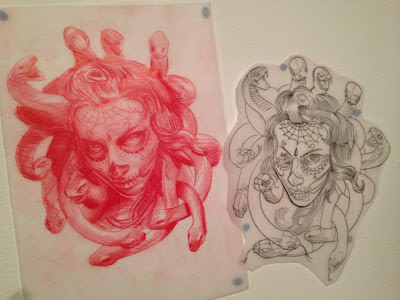 Two hours under the needle on the first session before I gave up, very uncomfortable over the ribs but will look awesome once done :) 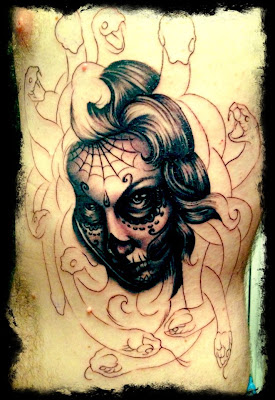 Have a bit more patience with newbies. Of course some of them act dumb -- they're often *students*, for heaven's sake.

The amazing Joe Struck was commissioned many moons ago to do some work for me, and even as I took a lengthy break, he busied himself with the task at hand and I'm pleased to unveil said hard work this fine evening to you.

And with that, I'll be Killing it Old School, go back to my roots, Tech 1 frigates will be my focus.

Natural selection saw to it that professional heroes who at a crucial moment tended to ask themselves questions like "What is my purpose in life?" very quickly lacked both.
-- (Terry Pratchett, Interesting Times)

In trying to gauge the capabilities of the new locals, I have lost a few ships foolishly, or so I would like them to think, but mainly foolishly, I'm a little rusty from my long break. Their will is strong, their capabilities decent... But their smack is lacking.

What I can say is they are a little gun shy when they don't outnumber you, which in my case means they are reluctant to 1v1.

Much like any opponent of overwhelming numbers in the past, I need to be more patient and choose my targets, fight on my terms, may we all live in Interesting Times
Posted by Kane Rizzel at 12:54 3 comments:

More than I can Chew... I bite at thee

It was hard enough to kill a vampire. You could stake them down and turn them into dust and ten years later someone drops a drop of blood in the wrong place and *guess who's back*? They returned more times than raw broccoli. -- (Terry Pratchett, Feet of Clay)

The return had not been planned, these things never are, but as with most things that go unplanned, one starts as one wishes to continue.