Humans suffering from a conflict of signals aren't the best people to be holding guns, especially when they've just witnessed a natural childbirth, which definitely looked an un-American way of bringing new citizens into the world. 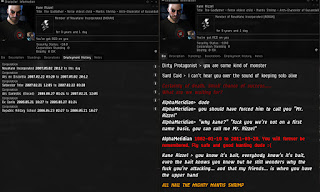 Kane had a big birthday a week ago, ten years, who'd have thought?
Ten years and a 177million SP is a long damn time, granted the last two have seen me away from the game for the most part, I still yearn to return and cause untold havoc.


It was also nine years ago I officially started solo Piracy in my solo corp with my band of merry alts.

I am currently in La Spezia Italy, around the corner from Cinque Terre, which if you don't mind the thousands of tourists is actually stunning. We set sail for ViaReggio this week and then Rome shortly after before heading to Sicily, after that I take two weeks in June to go home and celebrate my birthday before returning to the ship and heading back to France.

Plan at the moment is to return to the Antarctic at the end of this year to stop the Japanese whalers from killing whales in the Antarctic Whale Sanctuary against the rulings of the ICJ and against the moratorium on whaling.

I really miss you ladies and gentlemen.