Do Rifters dream of Titan killmails?

The Patrician was a pragmatist. He never tried to fix things that worked. Things that didn't work, however, got broken.
-- (Terry Pratchett, Soul Music)

The Garbage Man, a Rifter built from loot, every aspect of him from from his hull and rigs built from the fallen before the guns of his predecessors. I love the Rifter so much, it was the first ship I aimed for as a new Capsuleer all those years ago and the one I always turn to when violence is on the menu.

Now, there's a group of pilots out there, who's very corp name is all about the Rifter, run by Miura Bull over at Brutor Bullfighter, the Black Rebel Rifter Club. I've seen one or two of these pilots running through the area as of late but always just passing through. This evening however a Rifter lingered in system too long and it piqued my interest.

The Garbage Man undocks, scanner looking, hoping for a direction. First call is the 2/10, so often a haven for frigate combat, but I pass the Rifter in warp. I land and warp in regardless, maybe I can be the hunted. I narrow the scan and point it in the direction of the acceleration gate, the Rifter appears, but warps away towards the station.. I warp towards the belt closest to station, at zero I land, fifty clicks away as the Rifter warps to the furthest belt from the gates, I follow at zero and land fifty clicks away again, just to see the Rifter warp out to another belt, I naturally follow but this time at fifty.

I land right on top of the Rifter, lock him up and prime tackle, for some reason The Garbage man loses lock and I re-acquire the target but he is shooting me and opening a sizable gap.

Tackle overloaded, the Rifter is fast, even webbed and scrammed he's running 600m/s, comfortable outpacing me. I surmise afterburner, overdrive and web, meaning if I get close, he will die as he has no tank.

I'm deep in armour, I overload my afterburner, forcing The Garbage Man closer, collision course set, one of us is going to explode, so might as well take destiny on head first. Meter by meter I edge closer, no use trying to get under tracking, this was a flat footed fist fight, two mighty warships slugging it out to the bitter end and what a glorious end.

The Garbage Man is close to structure as his 150s, almost melting as they furiously spit death across the narrow gap between the two Rifters, one of which buckles under the onslaught.

From bow to stern, fissures open up as the Rifter hull crumples, stripped of armour she is now at the mercy of the very space surrounding her, atmosphere and fuel being vented through the cracks, ignited by sparks and burning, exploding, bits of Rifter raining against Rifter, one standing, the other defeated.

Good Fight is shared on local comms, truly it was and one of the better Rifter vs Rifter fights I've been in for a long ole time. I like his fit, something different and it definitely surprised me.
Posted by Kane Rizzel at 16:31 8 comments: 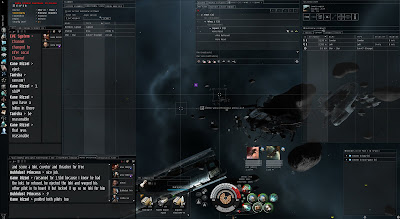 Edit: Soloing Drakes in a Rifter is the definition of cool (Sure it's not a great fit but a kill is a kill :P)
Posted by Kane Rizzel at 06:31 4 comments:

Some milestones in Eve are greater than others and the journey to them is what defines many of us as pilots, pirates, capsuleers. I have achieved a fair few in my time and I now celebrate re-achieving another.

Many moons ago I had busted a mission in progress in a nearby system, a Raven battleship was downed by my Pilgrim, using drones and energy neutralisers. However once the Caldari Battleship went down my drones, in their infinite wisdom, decided it wise to destroy one of the rats, thus ruining my pristine, perfect negative ten security status.

The Hawk and the Worm... Or how Kane feels dirty

As is the always the case, intel of a ship trying to run the static plexes reaches me, a Hawk assault frigate is in the 1/10 DED rated complex. Sitting on my new couch, I peruse the ships in my hangar and choose something a touch... Unconventional:

Korako 'The Rabbit' Kosakami, Gurista leader, has a particular love for stealing the Caldari's ship designs, souping them up, and turning them on their creators. With the Worm, he has taken the Merlin design so familiar to Caldari pilots and turned it into a defensive powerhouse with increased electronic warfare capabilities.

It is... Very different from what I normally fly and is not exactly fit to the most common specifications but all in all I thought it would be ideal for what I intended and as is my habit, I intended to introduce it to someone in a violent fashion. The most peculiar thing about this particular Worm is the tank, the fact it doesn't fit a conventional tank means I would be relying on things out of my control to win this fight, but you never know your luck until you try it :)

I warp to the 1/10, he's just about to activate the gate into the second room, I follow with all haste as there's only a small window for me to activate the gate on his key. We both exit warp about two clicks away from each other and I engage, point blank range, rockets fizzing all around, I deploy my tank... A flight of EC-300 ecm drones...


He's hitting me hard, I have no shield buffer, or armour for that fact, I'm relying on the ecm drones to get a jam and some fancy flying on my part.

He's hitting me very hard up close, at 10% shields I hit my afterburner, to gain range and possibly decrease the damage from his rockets, at ten clicks I set orbit, dual webs and scram holding him in place as my speed mitigates some of the damage from his launchers.

My thermal rockets aren't doing much but the EC-300s are starting to do their job, allowing me to regenerate some of my shields. I change to EM rockets and the damage increases, along with the jams, I'm starting to turn the fight, so I move in close again, but he relocks and starts to pulverises my shields, Once again I move out to ten clicks to mitigate the damage.

His tank is failing and I'm at about 50% shields, I decide it's time to finish, the EC-300 drones have another jam cycle and I recall the little beauties... Only to deploy a flight of Warrior IIs to help finish off the last of his shields.

He explodes violently, bits of Hawk littering the plex.

A good fight shared in local and an apology from me for using ECM drones.

Sure I felt dirty, but it was a good fight, a fight in which luck, more so than any other fight, played a very big role and for once I was on the other end of EC-300s :D
Posted by Kane Rizzel at 04:09 5 comments:

Luck is a fickle mistress, still reeling from a serious case of not having any, I decided to run around in The Cunning Man, yet to get used to this new clone, a little stiff and in need of some smiling from the Lady herself.

A Vagabond from Electus Matari had entered Eifer and I would need something a touch more... Potent.

Enter Flubber, born from the ashes of her predecessor, a Fleet Issue Stabber and a ship perfectly suited to duel the Minmatar Heavy Assault Cruiser.

I head on over to Eifer and start moving around system... Waiting... Patiently.

My patience is rewarded, belt 1-1 was to be the place as he warps in on me at 50km. There would be no Lame Kane, no Crazy Ivan's as the Vagabond comes right at me, pauses and moves off at range, overloaded webs reach out and slow him down enough for a overloaded scram, shutting off his MWD, which allow my webs to be more effective.

Flubber moseys on over, right up the Vagabonds nose, drones and ammunition already flying between us, my shields stripped, a race for survival, guns overloaded and his shields start to wane, once stripped his armour and structure become a casualty of Flubber's guns and drones.

Unlucky for the Vagabond pilot but a good fight none the less, as much shared in local
Posted by Kane Rizzel at 15:30 2 comments:

How noob can you go

Bombing around Eifer in my Rifter, I had tackled a Drake earlier for the M34N crew and ransomed the pod for a few hundred milllion, so things were looking rosy.

Later on a small gang were camping the Emolgranlan gate and I tried to draw the Wolf off the gate, eventually he started to close the distance so I warp to 100km off the gate, so as his friends couldn't get a warpin to him and spoil the fun...


Can you guess the Facepalm?

... I agress the Wolf, in full sight and range of sentries :FACEPALM:

I warp my pod out and offer a 1v1 to the Wolf with a new Rifter which would take me a minute to fit but nothing in local is uttered, so I warp to Gusandall gate to get another Rifter, land, there's a Hurricane just landed as I jump through the gate...

... And I'm in the station, sans implants and a hefty cloning bill :FACEPALM: