I must confess the the activities of the UK governments for the past couple of years have been watched with frank admiration and amazement by Lord Vetinari. Outright theft as a policy had never occured to him.

Nashh Kadavr and his EVE_NT team have a youtube channel that broadcasts all there torunaments and events, give it a follow and enjoy Tournament PvP at its finest.

Really stoked to see the EVE_NT brand grow so much since that first meet a few years ago.
Posted by Kane Rizzel at 03:29 No comments:

"I like the idea of democracy. You have to have someone everyone distrusts," said Brutha. "That way, everyone's happy."
-- (Terry Pratchett, Small Gods)

The corporation hangar is crowded, various methods of violence adorn the cavernous hangar of Gusandall station, massive containers full of modules, ammunition, drones, and loot sit in one corner, in another is a freezer container full of over a thousand corpses, and a few frozen scientists.
Numerous unbuilt hull packages sit waiting to be opened and assembled.

I open the datapad and start looking at various fits, some in serious need of updating, some frigates with large rigs still fitted. So I spent most of the day updating and refitting dozens of ships, most have never seen the outside of this hangar, some never will.
Keira's Moros and Apostle sit idle, the Apostle needs to be refit but no way of getting hold of my errant sister, Keira the only member of the family able to fly both capital ships.
My Command Strategic cruisers have been totally refit, at great expense mind you for a totally different role, which would mean being part of a fleet so they too will now stand idle, but at least they look awesome

It amazes me how when left idle for so long, that some of the fits of my ships no longer 'fit', degraded CPU and Powergrid seems to have been the biggest issues with most of my frigates.

It's a good thing the Gusandall pocket is a dead end of space, with very little traffic and even less targets presenting themselves over the course of the day I was able to get everything pretty much sorted.

I should really look at consolidating some of this stuff, maybe try and sell off some of my unused shinies, but that will take a great amount of effort, and probably require a few freighter loads to get everything to Rens or similar, which would require tracking down another NovaKane associate who has a freighter and having the patience to sort through everything.

It's crazy how things have accumulated, I guess being away so long has given me fresh eyes with which to assess my needs, and I could really do with less, or more ISK. 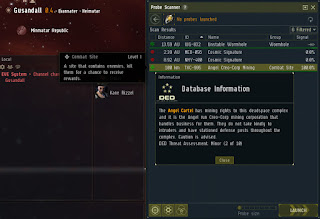