It seems CCP is shitting all over its player base and is seemingly going to ignore critical issues for other shiny and useless things that the players of their main cash maker don't give a flying fuck about.

Now, while I have really enjoyed my many years playing their game, I can not and will not continue to give them money while the game I love continues on a downward spiral.

CCP have stated that EVE is, from a technical standpoint, in better shape than it's ever been. Shit, how bad has it been in the past? And how the fuck have we not noticed? Cause it's in a shit shape right now with regards to lag, database issues, connectivity issues etc.

Yes, I'm mad, but not mad enough to continue wasting money. Just a few loose ends to tie up and then I'm offski.

A friend of a friend engaged a Drake, in a belt, in Ingunn, with his Hurricane.

Now the more savvy amongst you are going to say "But Kane, surely it was bait?"

So our friend's friend mentions in a shared friendly intel channel that now there's another Drake, and a wolf and they have commenced hostilities against his Hurricane.

He was fighting back admirably but there was just too much fire-power being dealt to his Hurricane...

With a few of the M34N crew hanging about and some friends from Jovian Enterprises, a blob of some significance descended upon the belt where our friend's friend was being violenced.

Six brave souls ventured forth and outblobbed the three mighty warriors from Everset Dropbears who had by now vanquished our friend's friend's Hurricane.

First order of business was dispatching their Wolf, which we did, then onto the primary Drake, which I had pointed, Laneth had pointed the secondary Drake as our 3 battlecruisers, 1 heavy assault cruiser and two faction cruisers opened hostile negotiations for cessation of hostilities.

Props to the Dropbear Drakes, solid tanks but just not solid enough, as our blob, blobbed out the stars, they went down, like the prom queen at the after party.

The Dropbears were gracious in defeat and even offered "GF" in local, no mention of our massive Blob however :(

All loot went to our friend's friend to help get him back on his feet again.

You never ever volunteered. Not even if a sergant stood there and said, "We need someone to drink alcohol, bottles of, and make love, passionate, to women, for the use of." There was *always* a snag. If a choir of angels asked for volunteers for Paradise to step forward, Nobby knew enough to take one smart pace to the rear.

Sometimes you just get lucky and targets come to you.

I entered my hangar and spotted an intel channel lit up like a xmas tree. The locals were mustering for a fight as a large fleet of Electus Matari were in the area but as soon as we got our shit together the fight had left for highsec.

So we sulked a bit and then things started to kick off.

The majority of our gang were in battleships due to the nature of the Electus Matari fleet but once they had departed we were left with nought to do but wait for targets. They eventually came in the shape of Drakes, Harbingers and Hurricanes, two of each, coming from different directions.

Myself and Uma bear were at the Emol gate in Eifer, the rest of the gang were at the Gus gate, Drake jumps into them from Gusandall. Drake, Harbinger, Harbinger, Hurricane and Hurricane jump into myself and Uma bear. I get tackle on Drake and we engage, whilst the rest of the hostiles warp down to the the Gus gate. Uma and I kill the Drake as a fight kicks off down Gus gate. I warp at zero in Nanny Ogg, my Abbadon, the fight is about 70 clicks away but no matter, scorch gets loaded and boom. Drake and two Harbingers down, two Hurricanes run away. We did lose a friend in a Rifter... Good fight.

Whilst waiting out my GCC, an associate spots an Abbadon, three Stabbers and a Rifter loitering at planet 4 in Gus. I grab the Ghetto Bhaalgorn and warp myself in between them. I lock the Baddon, Stabbers and Rifter up, primary the Baddon and start pew pewing.

I mention on vent that I have a little fight going and before realising I could probably solo the lot, I asked if any of the locals would like a bite. I recognise one of the Stabber pilots as an unlucky fellow whose Scorpion ran afoul of the Ghetto Bhaal last night. They didn't last very long as the sharks went into a feeding frenzy.

Once the dust settled another small gang blew through Gus but only a Dramiel swung by to see what was up and got promptly tackled and webbed from about 50 km and got popped by battleships and a battlecruiser.

Then what seemed like a rematch from earlier was on the cards, but escalated in size. the small battlecruiser gang had turned into a small battleship gang and we hastily reshipped from mainly recons and heavy assault ships to battleships.

I got the Ghetto Bhaalgorn ready for some hot action and I would bait as I volunteered to get the ball rolling.

As I undocked it seemed the hostiles jumped into Eifer but scouts reported them re-approaching the gate. I land at zero, hostiles start to jump in, Kane is Primary...

THERE WAS A FIREFIGHT!

The kitchen sink was well and truly thrown out the door, two Typhoons, two Dominix, two Armageddons, a Hurrican, Brutix and stealth bomber of some sort start engaging little ole me, a Scorpion warps in at range and starts jammin.

Our now rather large fleet warps in with Kurtz calling primaries, secondaries, neut targets & tackle targets. I'm having a ball, the versatility of the Bhaal been shown to full effect as I shoot the primary, web the secondaries, neut the geddons and just generally go mad.

At 50% armour there's a moment when I'm asked if I can de aggress, as the Scorp is making remote repping of my Bhaal a bit difficult, but their DPS is dropping as they encounter what is know in these parts as the Gusandall Initiation. At 32% armour I'm starting to think about de agressing but I just say I'm fine and we deal with the rest of the ships that lie before us, one domi managing to de agress and jump out, the Scorp, Brutix, Hurricane and stealth bomber able to stay out of range of tackle and bug out..

I love MEAN, calm throughout the fight and boy what a fight.

Thanks for coming to Gus, please call again.
Posted by Kane Rizzel at 16:15 2 comments:

A while back I read a blog about the contents of somebodies hangar. 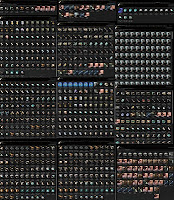 There's a lot of stuff and a lot of it is very old, some of it pre dates a few nerfs and will probably never be flown again, a kind of museum to the glory days of ultra fast ships and ludicrous speed.

Sassy B of i drawed sum spaceships! fame has designed a new blog header for this here blog and oh... my... god!

The Bhaalgorn, my favourite battleship has replaced the Rifter, my all time favourite ship and icon of most of my forum signatures and blog headers.

Much appreciated and I am in awe of your skill.