[OOC] An Update of sorts

- "You're Hells Angels, then? What chapter are you from?"
- REVELATIONS, CHAPTER SIX.

I'm out of game for the foreseeable future due to pressure at work and upcoming leave. I may from time to time log in just to check mail and the like but apologies to anyone who may feel I'm being rude by not saying hi.

There are many other blogs out there that are worth reading and you can find some of them linked in my sidebar.

So Kane, anything exciting happen?


A slow few days. Lost two Rifters, one trying to solo an Arbitrator and another trying to solo a Hurricane. Two Assault Frigates, three Frigates, two Cruisers, two Destroyers, two Battlecruisers, a single Covert Ops frigate and six pods killed. I don't count the few hundred haulers killed in two seperate gatecamps as they are just fluf and don't really count towards anything meanigful, I was bored and there weren't any targets around (None of the hauler kills were posted to my killboard)

No fight really stands out and I'm struggling to come up with something witty or clever to write, just thought I'd write a small update. Sorry to disappoint.

I highly recommend reading this blog post by San Rintu about a truly amazing kill for flash and his new corp mates, The Bastards. A kill all Pirates dream of, Faction ship with some juicy modules and most of the good stuff dropped. Flash's own account of their good fortune can be found here.

Right now it's time for dinner and maybe some movies, also need to get Keira to move some of this loot that's cluttering up the hangar.
Posted by Kane Rizzel at 10:49 3 comments:

I get knocked down, but I get up again.

In retrospect, Victor was always a little unclear about those next few minutes. That's the way it goes. The moments that change your life are the ones that happen suddenly, like the one where you die.

"Sir"
"Yes, what is it now?"
"Well, there's a Rifter sir"
"A Rifter you say?"
"Yes sir"
"...and what about this Rifter?"
"Well it seems to be attacking us"
"ATTACKING US?"
"That is correct sir"
"Are we by any chance attacking back?
"Not at this time sir"
"WELL WHY THE HELL NOT?"
"It's a Rifter sir, it's not like it can hurt us, we are in a Raven battleship sir"
"Any details on the Rifter pilot?"
"He appears to be quite mad sir"
"He appears to be mad... Mad?"
"Yes sir"
"and how pray tell have you come to this astonishing conclusion?"
"He's in a Rifter sir"
"I think we've established that"
"and he's attacking a Raven battleship"
"Thank you captain obvious, I can see my money is well spent"
"Orders sir?"
"Oh I dunno, launch some missiles at him, that should scare him off"
"Aye sir"

"Sir"
"Yes?"
"Uhm... he's still attacking us"
"Have you tried warping to a stargate?"
"Aye sir, it appears our warp core is scrambled"
"Does he have any corp mates in system?"
"He appears to be alone sir, still firing on us though"

Meanwhile, aboard the Rifter:

Back on the Raven:

"Sir"
"What is it now?"
"It seems the local comms net has just spiked"
"And?"
"For a Captain of a battleship you sure do ask a lot of dumb questions"
"What?"
"See what I mean?"
"What did you just say?"
"Oops"
"What oops?"
"Onyx, Onyx, Onyx, Tempest and oh dear"
"What the hell is an oh dear?"
"It appears he has some friends... and they brought a Falcon"
"A Falcon?"
"Aye sir, it appears as if we are in a spot of bother"
"A spot of bother you say?"
"That I did"
"Wonderful, a few months out of the academy and I'm in a spot of bother"
"Systems jammed, shields failing"
"Great, just great"

"Where am I?"
"Welcome to the Quafe Company cloning facilities"
"Cloning facilities, how the fuck I get here?
"Now now, no need for that kind of language"
"Language? what's wrong with my fucking language? How the fuck did I get here?"
"It appears your escape pod was destroyed, hence you waking up in a cloning vat"
"UGH, headache"
"An unfortunate side effect but one that will pass, here's your bill, have a nice day"

Clawing my way back

Mmm, a Drake on scan, I narrow it down to a cluster and warp to the first belt at range.
Mmm, a Claw too, this should be interesting.
I engaged my warp drive to where the Claw appeared to be. Warp trails streaming off my Rifter as I entered normal space, the Claw over 140 clicks above me. I guess I'll just play possum and see if he bites.

Of course he bit, closing the distance quickly, very quicly. In the blink of an eye he was on top of me, the Drake warped in. Time to make a gracious exit.

The Drake left the scene and I warped back in at a range of 100km. The Claw clearly confident closed quickly again, locked and engaged me. Kane being Kane returns the favour, web overloaded, waiting for that magic number to appear on the overview.

Claw is fast, over 6km/s, I'm patient though, at that speed he won't be doing much damage to me. He passes within web range but gains distance too quick for me to react. I make a straight trajectory at full speed, his orbit changes to compensate, I "Crazy Ivan"*, web goes active, distance is closed, at point blank range things go south for the Claw pilot. The cordial "GF" is shared in local as I allow the escape pod to warp out, something I tend to do with arranged 1v1s.

Props to both pilots for honouring the 1v1, I imagine it was difficult for the Drake pilot to sit in system as his friend was destroyed but they both earned my respect for that.

A good end to what had been a pretty bad day for me, as with all things it's how one reacts to loss that determines who he is. I returned to Gusandall, satisfied and in despearate need of a smoke and a cup of tea.

* Crazy Ivan as described in this tale.
Posted by Kane Rizzel at 23:43 7 comments: 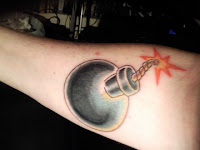 Work continues on my left arm and I'll post more pictures of that once it has been completed.
Posted by Kane Rizzel at 14:58 2 comments: