The calender of the Theocracy of Muntab counts down, not up. No-one knows why, but it might not be a good idea to hang around and find out.
-- (Terry Pratchett, Wyrd Sisters)

Looking for a fight in a Scythe I spot a Prowler dropping a tower in Eifer, I start to attack the POS as the tower is onlining, it goes live and I bounce out but head back to Gusandall and grab a POS Shot Geddon.

The ownder of the tower opened negotiations rather rudely and whilst they were ongoing I started making enquiries from a local dealer for some narcotics all the while gathering more souls for the party.

Shout out to c4 t and Push Pharmaceuticals for the speedy quote, if you need some boosters, their prices are pretty good
Posted by Kane Rizzel at 21:28 1 comment:

Just one of those days

First time in a long time I've been able to hunt properly and it just didn't happen today.
Flew a Drake for the first time, killed an unfitted Apocalypse, went on a solo roam, lost said Drake making the wrong choices trying to split a gang up, lost a very expensive pod to same gang, lost a very expensive Daredevil to a Jaguar and Ishkur duo later on, got chased off by a Proteus and Loki in my Harbinger and lost a very good Rifter fight against Saftsuze, very close.

Let's see what tomorrow brings.
Posted by Kane Rizzel at 17:03 No comments:

The Battle of Koom Valley is the only one known to history where both sides ambushed each other.
-- (Terry Pratchett, Men at Arms)

The Jaguar wants to be hunted, it lingers at belts and celestials, allowing me time to narrow it down but moving before I come out of warp. A smart pilot, but it wont be long until he waits for me to arrive.

I check my hold.

I have loaded Phased Plasma, The Jaguars natural resists and the overwhelming tendency to tank against explosive damage meaning it would be my best choice.

The Jaguar is narrowed down at the heart of Eifer and I warp to the star.

I land, he's 30 odd clicks off. Instinct takes control as I close, set orbit to 2.5km, spin up the guns, prime tackle.

He lights me up first, slowing me down with a stasis webifier, a warps scrambler making sure I don't have second thoughts. My afterburner strains against the webifier, pushing me closer and closer.

The battle is on as my scrambler glows, a large chunk of my shields disappears... This is going to be tough, my shield booster claws some back, but another large chunk of red appears on my HUD. I take a hit of some drugs, the universe takes on a blue tinge, I lose some control of my capacitor, coupled with the fact he has a small energy neutralizer would make this fight so much more interesting.

With diminished capacitor but with a massive boost to shield repair the fight goes on. He's doing good damage but my small caliber guns are eating away at his shield buffer, whilst my own bounces up and down like crazy.

My capacitor runs dry, an overloaded cap booster charge fills it but the shield booster is hungry, overloaded to keep up with the incoming damage. My opponent hits half shields, my guns are now set to overload as I wait for another cap booster to load.

I've broken his shields as another overloaded cap booster fills my capacitor. I'm rocking inside my capsule, urging my guns to do more damage, that last bit of hull vanishes and all I hear is the rain of metal against the hull of Greebo, my own Jaguar class assault frigate.

A good fight, a very good fight as I share as much in the local comms channel, not even attempting to lock the pod of a most valiant opponent. Not sure I would have been afforded the same courtesy but an honourable warrior deserves an honourable exit to what was a superb display of frigate piloting.

Zodiac Black, I salute you.

(As a side note, I was in the wrong implant clone for the Jaguar setup I was using, it would have made a massive difference were I with my Crystal set. Also, no command boosts as it was only Zodiac and I in Eifer at the time of battle )
Posted by Kane Rizzel at 02:56 4 comments:

Some lead, others take a break

It was a puzzle why things were always dragged kicking and screaming. No one ever seemed to want to, for example, lead them gently by the hand.

The family Rizzel will be taking a break from New Eden for a little while, except for Kane, who is the third member of the clan that is walking the line towards max Leadership skills.

At 0ver 98million SP I felt it was time :) Please note, Kane has no Capital ship skills 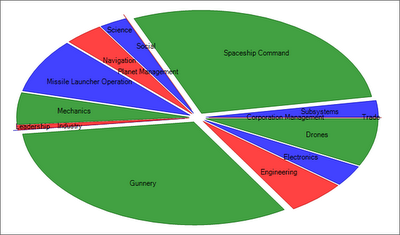 An interesting bit of pie.

I hope everyone of my faithful readers has a pleasant festive season both of you ;)
Posted by Kane Rizzel at 18:44 4 comments:

Look, that's why there's rules, understand? So that you *think* before you break 'em.
-- (Terry Pratchett, Thief of Time)

It seems I have guests.

Electus Matari, a rather staunch opponent of the fine art of Piracy has decided to make themselves at home in Gusandall. They attacked the local M34N corp POS in force over the weekend, destroying them without much resistance (to be fair, from what I heard, the locals just didn't have the numbers and when we do work together it's more of a flashmob than anything really co-ordinated) and have recently put up two of their own. Now I've never been sure what EM are all about. They claim to be loyal to the Minmatar Republic, they claim to stand for freedom, but then theY live such a cloistered life they might as well go full Amarr.

We advocate the right of all Minmatar to live in freedom and according to the customs of their clan and tribe, including those currently in foreign captivity.

They have very strict rules, much like the Amarr, they don't tolerate the freedom granted the true Minmatar rebels to make their living their own way and as such are no better then the slavers they say they are opposed.

Piracy is true freedom, the freedom they supposedly stand for and as such I shall venture forth to educate them on what it truly feels like to be free. Now I will state that EM have a few very good pilots, as such I should not be complacent.

In my adventure, I imagine I will lose a few ships, but I'll try not to give them easy kills. I will not engage them in fleets, I will not engage blindly and I will try pick them off on my terms, away from their large fleets, ECM and Logistics.

A few days ago I went about my business of Loot Redistribution as they were mindlessly shooting at POS.

This evening I engaged some folk trying to extract riches from Eifer, before returning to Gusandall and spotting a Dramiel in the direction of the 2/10 plex, an old adversary.
I warp in as Benito is 100 odd clicks away, obvious tactic would be to close the gap but not this time, I move in the opposite direction, he shall come to me... I hope.

He starts to close, slowly. Patience Kane, must not go full retard, be smart about this.

He gets about 60 clicks away, my afterburner is set to overload, so is tackle, I close under impulse, at 40 clicks I go green, in range, tackle, overload guns... BOOM.

The Dramiel explodes, violently, recent upgrades to the Blasters making them more volatile at close range. The pod is tackled and one hundred million ransom is offered and declined by Benito. A good fight, his corpse the prize.

Hopefully this is the start of something beautiful, an abundance of new friends to make and many explosions to share.

Operation Save the Angels

OSE is in full effect: