The class was learning about some revolt in which some peasants had wanted to stop being peasants and, since the nobles had won, had stopped being peasants *really quickly*. -- (Terry Pratchett, Soul Music)

I've been toying with something old, but kind of new and took it out for a test last night, however it didn't quite work out the way I had hoped, it did show that I can sometimes bite off more than I can chew, I did manage to kill two of the gang with the help of an old friend who has been on-world for far too long, Welcome back to Gusandall CPT NESSAJA 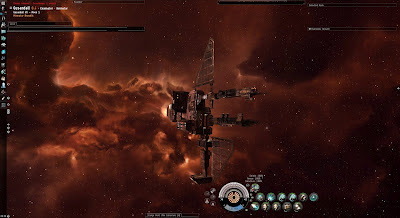 It tanks like a beast, no links, only drugs and a little grit, I probably would have made it out had I not derped and burnt one of the repairers. Matter not, this is the replacement, awaiting a similar situation to be hurled against.

Fighting outnumbered is something I'm used to, more apparent in recent months as the dwindling force that once was M34N not having my confidence to drop everything and help a friend in need. It will be something I will have to rely on even more after the choices I have made. C'est la vie.

This evening there was a Rifter and an Enyo loitering far too long at a safespot in Gusandall and as Kane does, I requested my associate provide me with the co-ordinates of the pair so that I may officially welcome them to Gus in my own special way.

A dangerous pairing, the recent modifications done to the base Enyo hull making it a DPS monster and we all know the Rifter in the right hands to be a dangerous adversary.

With the warp-in set I undocked in a Hawk assault frigate, itself recently modified and better than its previous incarnation, I made warp to the location and had my associate move off.
I land about 20clicks away, not the best warp-in but in my associates defense they were moving. I would have to rely on my charm and good looks to get the pair to hang about, but I didn't need any of that as the two of them must have looked at each other and said "Yeah, we can take him" and took me they did. Both engaged and moved to point blank range, I had primaried the Rifter as it would have the weaker tank of the two, it was going down but the Enyo had closed to within range of its blasters and started to rip my shields apart, Rifter goes down and I can switch tackle to Enyo, being able to gain some range and start to kite.

His tank is strong, my kinetic rockets a poor choice so I reload to thermal but something jams and kinetic are reloaded. I'm spamming scan as local rise and falls a few times, always wary of backup warping in and killing me dead. Slowly his tank breaks, a Crow warps in and engages, but Enyo is going down, my shields easily dealing with the Crow's missiles and the Hob II from the Enyo, its blasters not able to touch me at 9km.

Enyo explodes, the Crow casually saunters into scram range and it's all over except for the crunch of an escape pod.

Had a few good fights the past week, a Vigilant kill using something a little different again, a lot of fun to fly and taking the old Rupture out for a spin in the black. I do however fail at flying Drakes, I had to warp out of an engagement against a brick tanked Drake as I derped once more, burning out some of my launchers and not being able to break his shields before mine failed.

Don't you find the DPS of the Tempest a bit low? Or you try to kite a bit the targets?

it is a bit low but it is a brawler, kind of a Swiss Army knife of a brawler, using the utility highs for tank breaking, ECM removal and DPS mitigation, then a Monster tank.
It really is quite fun.

Garmon flies something similar but uses dual Neuts, I find with the prevalence of ECM drones that the smartie is touch.