People who are rather more than six feet tall and nearly as broad across the shoulders often have uneventful journeys. People jump out at them from behind rocks then say things like, "Oh. Sorry. I thought you were someone else."
-- Carrot travels to Ankh-Morpork
(Terry Pratchett, Guards! Guards!)

I arrived in my hangar in Gusandall station and was greeted by a message from one of the new locals, a challenge, a battle.

How could I resist, my mighty Megathron war ship versus what I assumed would be a Maelstrom vessel of doom. 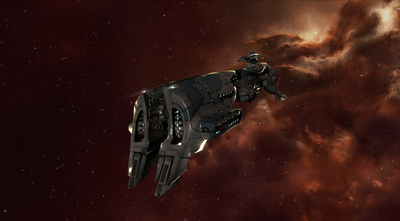 And so it was, I took my time, needed to do some stuff around the hangar first, checked and re-checked my ammo, cap boosters, seeing where I could jam a few more into the cargo hold, checked all mods, drones, and drugs.

I made myself a cup of Earl Grey and quietly enjoyed it before boarding Gasplode and undocking.

Battle would take place at Asteroid Belt 1-1, I warped in at a range I felt comfortable with and waited, sure enough, a Maelstrom appears on scan, just as a friend in a Megatrhon of his own jumped into system. I asked Kash to stay out of it and he kindly obliged. The Mael warps in, I drop a flight of Garde II sentries and closed, he drops Hammer IIs and a Berzerker SW-900 Heavy web drone.

I closed, pulsed the smart-bomb in my utility high, engaged web and scram and proceeded to  introduce hot anti matter into the Maelstroms pulsing shields.

His tank was amazing, I took a hit of Exile and started micro managing my reps and boosters, he was boosting a third of his shields with each pulse and doing great damage. It was going to come down to cap boosters.

I had gotten him to about half armour but his impressive tank would hold as long as his cap boosters did but he stopped doing damage as I easily repped back to full armour.

Well that would make it easier, I turned off tank, stopped cap boosting but continued to harass his shields.

And just like that, I made 100mil and the Mael lives to War another day. He warps out and I make way to retrieve my sentry drones when suddenly Pilgrim, decloaks off my starboard and engages, neuts firing the last remnants of my cap into oblivion, tracking disrupted and drones swarming me it seems like I'm done for, helpless.

I reload my cap booster and start firing off one at a time, pulsing my smartbomb but leaving my reppers off, I close to zero on the Grim and start to batter it, the Maelstrom pilot returns to the field in a Hurricane and helps me mop up.

I had three no charges in my cap booster...

Thanks to CptHaoc for coming back to help, Kash warped his Mega in at the end along with another of Haoc's corp mates in a Drake.

Belt 1-1 saw something epic and witnessed honour, something that is far too rare in this amazing universe.

This makes me wonder how much the booster was worth? :)
Posted by Kane Rizzel at 14:25

Did he have a web? I've speed tanked maelstroms without webs in megathrons!

Man sounds like a great fight and props to both of you for honoring the agreement, too many idiots in the game tbh and nice to hear about a story involving honor.

Sounds like a great fight and well done to both. Loved to have watched it.

These are the exact fights I wish I saw more of. Sounds like a great engagement and good show for him to return and help you take care of that Pilgrim.

Sard, he didn't have a web, except for the webber drone which died to the smartie.