Using a metaphor in front of a man as unimaginative as Ridcully was like a red flag to a bu-- was like putting something very annoying in front of someone who was annoyed by it.
-- (Terry Pratchett, Lords and Ladies)
Through various back channels an op of some significance was forming, Molden Heath the host, I was informed that I would be required to bring a plated Rupture, a quick scan of my hangars in Bosena confirming I had said ship available so I made preparations to clone jump, instead of making the x jumps from my home in Gusandall.
As the area had been sort of barren of late, I was certain a change of scenery might even change my luck.

I jumped over and contracted my Rupture to a carrier pilot who would be jumping it to the staging system, once done I joined the locals in harassing some Russians who had engaged an acquaintance one system over, unfortunately I started taking sentry fire as the locals were at war with the Russians and I was the only one who took GCC. With me yo-yoing to and from the gate we managed to kill three Drakes and scattered the Russians to the four winds. My Oracle in deep armour when the dust settled.

Back in Bosena it was time to move the staging system and once there I started waiting...

The op muster had come and gone, but I was informed plans had changed so I raced back to Bosena, to be told I would need an interceptor or assault frigate... Of which I had none so I started to peruse the well stocked Bosena market and bought a Stiletto class interceptor and went about the task of fitting it.

One of the rigs I had chosen presented me with a small problem, 114million SP and I couldn't fit it as I didn't have the skill 0_o

A quick trade with Tits and he kindly fit the rig for me.

So there I was, in an interceptor class I had never flown before, but eager to have some fun with it. 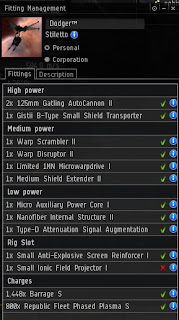 Soon we undocked and following our FC, the might Dirty Protagonist's orders we're soon on our way, the general plan was to find some Russians and start a fight, but as with most things, the plan doesn't always go as it should and we made a trip through Great Wildlands, trying as best we could to not give away details of our fleet or what direction we were coming from, but the Russians didn't seem too bothered and their supposed muster had also passed, many online but little movement on their part. Fact is, most of us had no clue where we were going either, but the promise of violence is like one of those things, where folk can't resist.

Eventually news of their dread deployment reaches us but our scouts lose track of them as the surrounding area is lit up with cynos, scouts move every which way but it is Sard Caid who brings the best news... Dreads sieging POCOs... But not Russian dreads. But that's not going to stop us now. The fleet had swelled to a massive thirty assorted frigates, interceptors, assault frigates, a destroyer and a single Caracal.

Sard barrels in with his Condor of Destruction and lays down the tackle, the dreads start to scatter and Sard points one of the Naglfar, the other getting caught up on the POCO. This didn't help it at all as our fleet of mixed frigates,  Thrasher and a Caracal descended upon the hapless dreads. Blotting out the star, we swarmed over the two Naglfar, grabbing points as the dreads cycled in and out of siege. Our minuscule DPS must have seemed amusing but we had one of the dreads at half shields when the suggestion of shooting each other was given, so that they could whore onto each others kill mails and to shorten the agonising minutes it would take for them to die, with no attempt from their corp mates to bring a support fleet to counter us and maybe save the multi billion ISK dreadnoughts.

The first dread dies and we turn all attention to the other and after what seemed like forever, the second follows suit.

The Russian dreads never materialised even after we used a Niddhogur carrier at one of their POS to induce a fight, so we just went in and incapacitated the warp disruption battery and then went home... All in all, a good night.

Good stuff Sounds like you had some fun Kane