"Why do you bother with him? He's had thousands of people killed!"
"Yes, but perhaps he thought that you wanted it."
-- (Terry Pratchett, Small Gods) 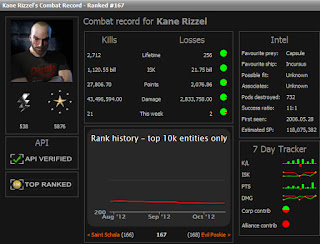 According to Battleclinic, I have inflicted over one trillion ISK in damage over my many years of piracy. A staggering figure and one which quite frankly blows my mind. In the process I have lost 21.75billion ISK in ships and modules...
An expensive past time this ole Piracy lark.
So what makes an effective Pirate? A question asked on the forums many times with various and very verbose explanations given, but the one thing I believe, is that a Pirate makes money from the violence he inflicts, minimising losses to increase profit.
Pirates are just businessmen... with guns, we redistribute the wealth, from your wallet, into ours, much like any businessman with any savvy.
So the question I now ask is this, would you do anything with in your power to make your business more profitable?

So this brings me on to the second part of this blog, and the part where I make a statement and then tell a story
Statement: I will no longer debate my use of links or entertain discourse with regards to their use with anonymous posters, comments by anonymous users or users not using their main in-game name will be deleted.
What I will do is give a little background as to why links made me the effective Pirate I am today. The key word here is Pirate, cause that is what I am.
I have never claimed to be the best solo PVPer in the game, nor have I ever claimed to be the best PVPer in my area, but what I will say, is that I'm one of the best pirates in the game and the numbers above give credence to my claim

The links were a remedy to my hunting of ISK farmers who would farm the 2/10 in nigh untouchable super frigates, who used a combination of the powerful gistii afterburners (which at the time gave better speed boosts than ordinary afterburners) and long range tackle to try and hold me in place whilst their friends would come and try kill me. Quite often elaborate traps were set to try and dissuade me from engaging them but I had built a powerful Jaguar that was perfect for hunting these pilots, but as time went on, they got faster and used ever more elaborate traps or just simply, warped away.
I got a little frustrated with these guys getting away, running the plex with impunity, them and their buddies laughing at me as I couldn't catch them or fell into their traps. Things had to change and in the NovaKane hangar, Keira was industriously studying leadership, she even went out of her way to purchase a mindlink that would be implanted once she had acquired sufficient knowledge to not have it fry her brain.

I'm not a vindictive person... Well... Actually I am and when the time came the plex farmers reaped what they sowed. Here is the story of the day Links went up for the first time, and here is the first kill using links.
Now tell me they weren't worth it?
The trap was for the Rifter to orbit me at range and hold me down while his Manticore friend obliterated me (back then stealth bombers were very good at killing frigates)

Links helped me achieve some other notable milestones, I was at one time the holder of the Interceptor speed record of 63km/s, a record which stands to this day, even though the universe has changed.

Skirmish links also allowed me to catch ISK farmers that plagued Ingunn, the extra range and speed afforded by said links meant I was able to catch the gun shy farmers no matter the distance, despite their over reliance on warp core stabilizers.
Links have made me a better Pirate, just as some use ECM or sheer numbers, with the help of their own links, I use the tools at my disposal and make no apologies for it.

And then there are the fights, where no links are needed, or used, a fight where all involved are there to shoot and be shot at, such as one which occurred only minutes ago in Eifer, a Rifter and Incursus, seemingly together, but not sure as a friend had watched the Rifter pilot dispatch a rather speedy and cocky IVY pilot back to highsec. I bring my own Incursus and this time I remembered to deploy my drone as I mark the Rifter as the primary threat and make with dispatching him as fast as possible but I fail key tackle and let him get out of range, so I switch to the Incursus as the Rifter goes out to about 20km to claw back some armour, the Incursus is rocked from top to bottom as lethal Null rounds slam into his hull, and he evaporates so fast after the armour disintegrated I almost double checked I didn't let the bugger slip away with some fail tackle, but the fight was not over, the Rifter barrels back in and I overheat everything... EVERYTHING.

The Rifter pilot had a little system failure which is why I was able to lock his pod before he warped.

As a side note, I am now the most skilled leadership pilot amongst my family