You've got RED on you

Who died and made you fucking king of the zombies?
- Pete

Many years ago I created this signature for my forum presence, one of my all time favourite Zombie movies, Shaun of the Dead was my inspiration because I was particularly drawn to a specific quote:

You've got RED on you

This quote has now become an Alliance, ingame, NovaKane Incorporated and associates will now fly under a single banner, as by now everyone knows who is part of my family anyways and it will make red standings easier to monitor between our various corps. For those don't know, we only have one standing, red, normally set for people who are known blobbers or dishonourable types that fly with logi/ecm. everyone else is just a neutral waiting to be red.

Now y'all know I do from time to time fly with others, but this is what NovaKane's standings look like, two of the excellent's are my associates corporations, the other is an old friends corp, now retired planetside and no longer a Capsuleer. 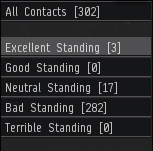 I don't shoot my personal friends, and there are a few, but I know them by name and I hope they would afford me the same courtesy, so I don't need to set blue.


Other than that, if it moves, shoot it, safeties off, open fire... If it doesn't move, shoot it, in case it decides to move at a later date, pay it forward folks.

AARGH wants BRAINZ... And it wants them now.

Bad is actually orange. You have no reds (terrible standings).

I suppose "You've got orange on you" wouldn't have quite the same menacing ring.

My bads are red, you can change them under appearance in your overview settings