You've met me at a very strange time in my life...

This week I celebrated 3000 kills, Pengo1998's Ferox being the lucky recipient of a particular brand of violence that is few and far between in low security space, good old fashioned belt piracy. That which started me on this age old journey through space.

This is your life and it’s ending one minute at a time.

I've been chatting with Sard Caid about my place in the EVE verse and I've come to the decision that things will change...


But not with Kane.

The Rizzel's will remain in our spiritual home and I'll continue to hunt as and when it pleases me.

In an earlier blog, I mentioned a new character I started. After a few unsuccessful attempts in noob friendly corps, he moved to Rens, where he was running some low level missions for some Sisters.

Using the new Duel System he quickly learnt that tracking disruptors are overpowered, but ever the optimist he engaged in Frigate on Frigate action with no concern for his own safety.
There are a fair few frigate pilots congregating outside the Brutor Tribe Treasury, many way more skilled than he, but he was still giving it his best.

This all got him thinking...

After fighting, everything else in your life has the volume turned down. You could deal with anything.

A quick trip for a skill book and a couple minutes of learning, he created his corp, an idea which will need a little help, and this is where y'all come in.

Rens Fight Club is open to all new characters and/or players. Frigates & Destroyers on the undock of the Brutor Tribe Treasury at Rens VI Moon 8.
Characters should ideally be made self sufficient, loss after all needs to be felt and a little mining for ISK never hurt anyone, but if you want to endow your new frigate hot shot with a fat wallet, so be it.
I was gonna say something about no podding of corp members, but people need to learn and clone costs on new characters are cheap.
Experienced players with new characters, help the new guys, like with suggested fits, EFT warriors welcome, slagging off precious newbies is not
This is purely for fun, there are no corp hangars to loot, or a fat wallet to steal, but hopefully a little corp could achieve some fun without too much hassle.
I fully expect a wardec or twenty, but frigates and destroyers don't cost much and fights are what we are after.
We have a cool corp logo.

You had to give it to him, he had a plan. And it started to make sense, in a Tyler sort of way. No fear, no distractions. The ability to let that which does not matter... truly slide.

So what now? Create a new character in a free slot, train up some skills and fly to Rens, Midnight Freeman is waiting for your application, learning skills for this corp to grow at a furious rate.
Join Kane's ingame public channel NovaKane and have a chat. 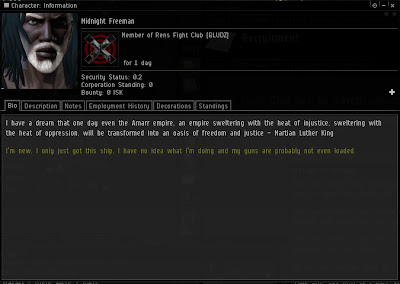 Good luck with the new venture Kane! and +1 for Piano Pixies!!

Pixies are indeed the dope.

Best of luck with the dueling bud, personally I think you should hire on MB as a consultant to develop your new corp's image

Saw the post. It's a great idea. I had been toying with a similar concept. I.E. a corp where everyone fights each other. A Cato Fong, Pink Pantheresque corp.

I think I'm sending an alt your way M8

A valiant plan, I wish you well with it!

I like this idea. I hope it goes very well!