FWZ and the cost of combat

I'm quite enjoying hunting in the Minmatar Faction Warfare Zone, whilst it is frustrating it can be rewarding. I'm now on to Tristan number six after a less than stellar night.

Last night I warped in on a Firetail that was waiting on the beacon inside a plex, his neut and superior speed made short work of me. Not an auspicious start to my evening. I caught a rather young Condor pilot a bit later, seemingly asleep at the controls.

Things started to get interesting when I warped in a plex just in front of a Maller, there was a Navy Slicer and Malediction on scan too, I was kinda hoping for one of them to come in, but when they all landed the fight was on and a race for survival was on. I aligned to the sun at full speed, clawing range from the Maller but the Slicer and Malediction had me tackled, easily weaving in and out of long point range, I set drones on the Malediction to try force him off, my overloaded repper just about keeping up with the long range damage, every now and again I would Crazy Ivan towards the Slicer but it's superior speed and agility meant I was just not able to get into web range, the Maller at this point was no longer a threat, I either needed to get out of point range o both o them or kill one of these fuckers. my repper was out of paste and as the long reload cycle started I had managed to force the Malediction off, still pointed by the Slicer, but the damage wasn't too overwhelming, I was however in deep structure but it was just me and the Slicer now, painful seconds ticking by as I waited in hope of the reload cycle finishing.

A really good fight and one that lasted far longer than I expected.

The night was seemingly a wash, no much about other than a few larger groups of faction warriors, nothing I could realistically pick off on my own and due to the previous two losses I was feeling a little disappointed, a quick Rifter snack perked me up a little and refreshed my appetite, but it was getting late so I decided to head to Bosena to dock for the night, on the way, passing through Evati I spied another Rifter on scan, I warped to the plex and made my way inside, I land pretty much on top o the Rifter and engage, moving out to Null range and launching my drones.

My shields are stripped and massive holes are being shot out of my armour.

I can not stress to you how important a skill thermodynamics is, the overloaded nanite fuelled repper had kept me alive just barely, now it was out of paste and I had to resort to some smart flying but the Rifter was by this point in trouble, I had hit structure but so had he and fortunately for me, I had more structure, an explosion of satisfaction as debris of the Rifter rains against my Tristan.

A great fight and after looking at the killmail, I saw the pilot was vastly experienced with a very high rank on Battle Clinic, the dude could fly. 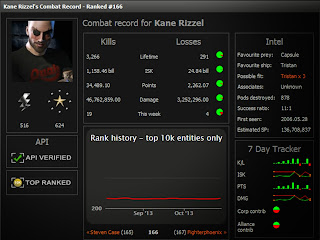 Over the years the way killmails are generated has changed, instead of just showing what was destroyed it now shows everything, a great deal of information can now be harvested from them.

Edit: It just ended up being a very, very expensive day
Posted by Kane Rizzel at 07:46

If it makes you feel better I lost one to Eve uni the other day:)

Next time you have a quiet day come to Auner and help teach the new meatshields - it's a pretty damn good system.

Wow Kane how you got killed by Santo,considering you stumbled upon him around Bamamake, I guess this guy really is that dangerous as some ppl warned me about him and his unpredictable nature.

I wasn't paying attention, one of many mistakes I've made recently. I was watching the new riddick on another screen, the part where Starbuck is in the shower, next thing I'm back in a station many jumps from home. Had I payed attention it never would have happened but c'est la vie :)