I think that sick people in Ankh-Morpork generally go to a vet. It's generally a better bet. There's more pressure on a vet to get it right. People say "it was god's will" when granny dies, but they get *angry* when they lose a cow.

Upgrades to services cause a black out, when no pod pilot dare venture outside, it's these times when we reflect on what has gone before and live in hope for what is to come. 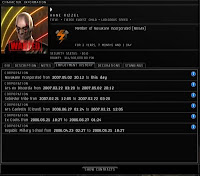 Much has changed, I've taken to flying the Abaddon a lot recently and I'm really enjoying it, sure it's slow but damn, it packs one helluva punch. I've started to fly with the Gusandall mob a lot more too and it's always a good laugh.

I've lost touch with friends in the Bastards but through no fault of theirs, their home in Evati not on my places to visit regularly. I don't roam as far as I used to, with limited time it is far easier to stay close to home.

It has been too long since I flew Interceptors and I desperately need to get back to them, same goes for the Rupture.

Keira can fly Carriers and Dreadnoughts, can shoot lasers, hybrids and projectiles but really needs to put her skills to use in combat.

Kenny, over a year as a pod pilot has become a devastating Tengu pilot and is responsible for running the Mended Drum, as well as production of rigs for me and vital research projects.

Our Covops friend is still doing her thing but has taken to doing some exploration on the side to fund her activities.

There have been times I've considered throwing the towel in but then the universe has so much to offer and there's so much to still do.

Where to from here, I don't know, all I know is, as Tessa Vaako would say, the future is exciting.

A sliver between me and the black

Had a close call in Nanny Ogg earlier this evening, news of a Maelstrom and Hyperion in Ingunn tiring the hornet's nest, the Gusandall locals all a buzz for a kill or two.

A small gang descends upon the Ingunn gate, all eager to engage either ship, Maelstrom had already jumped in and warped to the Eifer gate, Asss and I had landed on the Ingunn gate, a scout reports the Hyperion on the other side, we jump through as the Hyperion warps away to a planet, some follow but Nanny Ogg as I have mentioned is slow, just as I am about to enter warp it is reported the Hyperion has warped back to the gate, I cancel warp and approach the gate.

Hyperion lands, shortly followed by Assassin X in his Armageddon, Asss engages and forces the Hyperion through, I follow, once on the other side the Hyperion uncloaks almost instantly, as do I, engaging the instant the gate cloak wears off. The Maelstrom has entered Gusandall and warps in to help his friend, both decide Nanny Ogg to be the best choice of target.

Hyperion is primary, it goes down rather quickly, my armour creeping deep into the red, we all switch to the Maelstrom and it melts, just in time, only 4% armour between me and the cold embrace of space. Nanny Ogg stood firm as only she can, imperious.

A good if one sided fight, props to both pilots for engaging and especially to the Maelstrom pilot who came back to help his buddy even with the odds stacked against them.

Much thanks to Asssassin X who jumped into a Guardian to repair Nanny Ogg, saving me a whole bunch of ISK in station repair costs.

Stay Classy and catch you when the lights come back on.
Posted by Kane Rizzel at 17:54

Heh, how did you come up with "Nanny ogg" for the ´baddon??
Does it have a meaning or just a random name?

Nnnay Ogg is the name of a character in the Discworld series by Terry Pratchett.

I have, for a very long time named my ships after books or characters from the Discworld novels with a few exceptions where the ships doens't really suit having such a name.

the maelstrom pilot, miriam sasko, is the author of the rather excellent solo dominix lowsec pvp vid.. (http://www.eveonline.com/ingameboard.asp?a=topic&threadID=1228439)

Wtf is that Hyperion fitting??