Greebo's technique was unscientific and wouldn't have stood a chance against any decent swordmanship, but on his side was the fact that it is almost impossible to develop decent swordmanship when you seem to have run into a food mixer that is biting your ear off. -- (Terry Pratchett, Witches Abroad)

A Pirates Perspective now has one hundred followers \o/

Sgt Angua has been rebuilt and saw action this fine day against those asleep at the wheel (Ivan was afk playing Starcraft 2) and those bold enough to engage her. On both occasions the victims were in Dramiel class frigates. Whilst some say they are overpowered, I treat them more as a challenge. 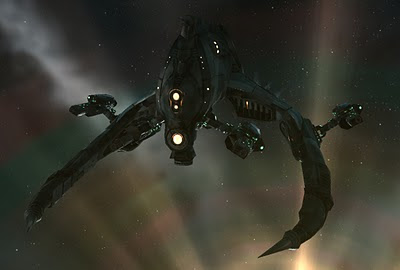 On that note, CSM elections are upon us and there are a fair few folk campaigning for buffs, nerfs and whatever else will get them votes. This term, much like last I'm not following who wants to do or say what and as such will not promote any candidate. It is up to you the individual to make your own mind up, it's the only true freedom we have.

What's in a name?

There have been a few queries regarding the names I assign to ships. As many have noted I use the work of Terry Pratchett as my reference and use his books and characters for inspiration, but am also known to use other sources depending on my mood or the role of the ship.

Sometimes a name is used because of the characteristics of a specific person or non person in the Discworld and how it applies to the ship.

One such specific case is Sgt Angua: Delphine Angua von Überwald is the first werewolf in the Ankh-Morpork City Watch, hired under Lord Vetinari's "special hiring procedures", at the same time as Detritus (a troll) and Cuddy (a dwarf)

She is a Werewolf and as such some have asked why I would apply the name to the Daredevil, well, it's mainly because of her tenacity at tracking criminals/prey and the ferociousness and power she possesses.

It's also a note that I use her rank as Sergeant and not her latest rank of Captain, but this is because I will always remember her as a sergeant.

Other names are a play on words or a number of words such as Flubber because that's what I call Fleet Issue Stabbers, get it? I crack myself up sometimes :)

Then there's something like the Amarr Navy Slicer which I call Victorinox, or the Worm named Squishy or a Zealot named 'That's no moon' because I got the fit from a friend called Deathstar.

There's a Stabber called Sho Kosugi, which was used for Ninja Salvaging by an associate and two Pilgrims named after famous Pilgrimage routes, Bodh Gaya and Kumano-san-zan.

I like the names to mean something, even if it is just to make me smile or giggle.

Quotes from the void

Over the years I have collected quotes from various channels, I'll share some of them now as I go through my notepad.

oogs > kane, i think you made a friend for life with that farmer :
oogs > :)
Kane Rizzel > I hope he doesn't get beaten :D
Cletus Cassidy > lol
Cletus Cassidy > just imagine the inspirational poster now.... "The Beatings will continue until Kane goes away"

oogs > wow, heh. i thought i was looking at local, and I saw Kane up there. first thought was "oh shit, dock!"

Tadrith Windblade > what kind of ore is in this belt
Kane Rizzel > it's normally explosive with a load of kinetic and thermal thrown in, sometimes there's even EM
Tadrith Windblade > hey i dont need pvp info, im just a miner trying to earn some money

Snake Boy > when i grow up i wanna be like Kane

OriasV > Welcome into the presence of Kane Rizzel, please kiss his feet before entering
Kane Rizzel > lol
Kane Rizzel > glad I wasn;t drinking anything when I read that
Szeth Kiros > wow, someone has a bitch
Szeth Kiros > =)
OriasV > Nah, he just apparently has a legacy, you cant join without knowing about him
OriasV > its like walking into a church and asking who jesus is
Szeth Kiros > So, you kiss jesus's feet too?
OriasV > That's between me and jesus

Shadowforged > The mission agents in Emolgranlan send folks several jumps the opposite direction because they know Kane waits in low sec just one jump out.
Tor Lann > truth

Mynxee > I wish i had Kane's balls.

Ralph42nd > jesus if I ever see you in local ... I'm going to just self distruct

Miura Bull /emote sometimes has to pinch himself . . . sharing a channel with two Gods like Garmon and Kane Rizzel

[quote="Wanna Kill"]speaking of - very, very few of the 'famous' eve players ive seen are anywhere near badass. Kane rizzel is the only one who comes to mind as being badass, not a fucking fatass like that fella

And lastly, how to upset a Chinese ISK farmer after they swear at you for killing their Raven, just swear back at them in their own language :D

See, they do know English
Posted by Kane Rizzel at 16:30

Congrats on 100 followers! Although, that number is really just other people that have blogger accounts (I'm 101 now btw), you must have many hundreds more that subscribe to you via google reader etc...
Nice dram kills!

I enjoyed reading about your naming philosophies . . . and then, imagine my surprise when I get a quote! Awesome!

Heh, I made it on your quote list, I feel proud.