Many an ancient lord's last words had been, "You can't kill me because I've got magic aaargh." -- Magic armour is not all it's cracked up to be. (Terry Pratchett, Interesting Times)

Not much about today, a good 1v1 vs Ava Starfire earlier in the day, letting a Harpy escape not once, but twice, but still managing to kill his Dramiel corp mate.

So things weren't looking up but late evening, one of my associates reported combat probes on scan as she was running an anomaly. A Cyclone is spotted on scan, shortly followed by a Tengu. Tengu moves off scan but is still in system, a boosting T3 no doubt but I was up for a fight regardless. My associate had cloaked in the anomaly and reported the Cyclone had warped in.

I warp in on top of the Cyclone and engage immediately, he lights me up, scrammed I can't gain range as my MWD stares at me blankly, but I fight tooth and nail, his tank impressive, boosting... A lot. My shields are done for as we both enter armour except he boosts some shields back even under staggered dual neuts.

Mort collapses under the onslaught, the Cyclone at about 10% structure as I warp my pod to safety.

I decide to go back for seconds, grabbing Sgt Detritus, a Harbinger :)

The Cyclone had docked to repair the damage from the first fight and went back to the anomaly as he exited the station, I followed immediately, almost catching him on the gate but he waited for me inside.

Knowing I would struggle breaking his tank, my associate decloaked and engaged with her Ishtar, a flight of Ogre IIs spewing forth from her drone bay as I kept the Cyclone pinned down. The Cyclone still tanked like a champ but the combined firepower eventually breaking him.

A good fight for me in the end as I got revenge, even though it was a team effort, the Cyclone Pilot not saying anything after his loss, I don't think he was happy, the Tengu leaving system shortly after he did. Impressive tank mate, something I'm definitely interested in for the future.
I don't think I would have broken the tank on that thing without the Ishtar's help and would have lost another ship in the search for vengeance. 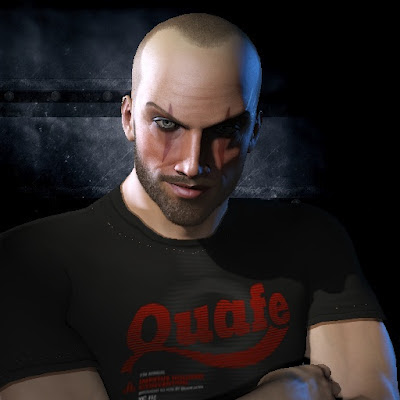 Man, I would have either failcon'd him for using links like that or probed down the booster while he was busy with your main. Good money says his tank wouldn't have held so well without tengu links.

Also would have consider telling yuor associate to use something with large smarties to nail the pod; an LSB tank that holds up under that much EM/THM damage probably had at least LG crystals + blue pill going.

Elite pvp deserves its just reward, after all.

Now now...Novakane Inc also uses a booster alt, so it is a bit hypocritical to complain about others doing the same.

Never once complained about the link Tengu, pointing out it was there, I know I'm not the only person that uses them, and everyone else is allowed to use theirs.

I know you don't complain, my comment was directed to Sard Caid ;)

sard wtf dude
kane also uses boosters. you are a pirate and i don't think you'd be saying NO to this new guy rocking a booster.
this guy used a fucking vanilla t2 cyclone for some pr0 motherfucking pvp
this is why i stopped playing eve tbh
ant

I think y'all need to fix your sarcasm detectors

It may come as a surprise, but I don't particularly enjoy the current state of boosting alts, or using alts in PvP.

I prefer attempting to punish folk for multiboxing than matching it for a fight myself: it's very typical when you remove another player's ability to power game, they quickly cede the field for less risky ventures.

Kane did indeed deliver a good 1v1. I was douching around with a new wolf fit with MWD, not exactly optimal for fighting a hawk, but gave it a go anyway... and did kill Santo Trafficante with it immediately before my fight vs Kane.

He kept range very well, but allowed me once to pulse my MWD and burn in again, landing some good hits. If i hadnt pilotderped at the end of the fight and had approached a 2nd time, or had an AB fitted to tank the rockets a bit better, I think I coulda won this. Half armor or so on that Hawk when I went down.