Well... achieved another milestone today, nothing much in the way of action but according to BattleClinic I have over ONE THOUSAND KILLS! They came courtesy of a Merlin and Rifter duo that I was tracking, not much to write about the fights, I was in my Jaguar when I warped in on them, killed the Merlin and pod as the Rifter warped out. I would later catch the Rifter and her pod whilst in my own Rifter.

In other news, Keira and our sneaky friend ran a 5/10 DED Drone complex early this morning, I was in no state to Pirate as I had a bit too much Bourbon at the club earlier and by too much I mean I couldn't feel my fingers. Some very nice ISK was made and should fund us nicely for a while. 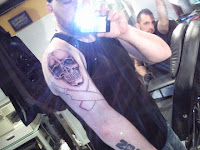 New tattoo started last Monday, two and a half hours under the needle and another two sittings to go before it's done.
Posted by Kane Rizzel at 14:20

Nice tat! It's like you're a real pirate now.

*swoon* That is some nice ink.

Nice ink - I always wanted to get a real tat, both of mine are jailhouse :P

Hello Kane. Lovely tat - in my mind's eye; I never imagined you would have a tat in RLY. Seriously cool.

Congrats on your 1000th kill mate. You are bad man.

Congrats on the kill milestone!

I'm going on record now as saying I'll get my first tatoo when I achieve 1000 kills 10 years from now, heh.