My name is Midnight Freeman and I live here.
Rens is one busy system, traders, gamblers, scammers, griefers, warriors and poets, all passing through on the way to or from their next big adventure. Some stay for a little while, others for longer, but one thing that never chages, is Rens itself.

I live here because it's a good place to get into a fight.

Tonight was such a night, I was mooching about, challenging various folk to duels and not having much luck. So I docked and went for dinner, some tofu noodles would make me feel better and when I returned I would challenge people in the face.

I undock one of my new Tristan class combat frigates, having moved on from some great success with the Atron class attack frigates. I have a similar fit as my Atron but with the added versatility of drones, something unaffected by the ubiquitous tracking disruptor that spelled the end for many an Atron.

There are a lot of corpses floating in space and I start to clear up some of the poor frozen meatsicles when a Rifter class combat frigate, something my mentor and hero, Kane Rizzel loves still to this day, somewhat out of favour with the duelists of late but things are always changing as the various weapons manufacturers update systems and weapons to make them more powerful.

This particular Rifter pilot is a member of the Midnight Freeman Billion ISK Pod Club, along with this fella. So I assumed he was after some revenge. Now a friend of mine has also podded him recently, costing him even more ISK, so not only may he be after revenge, but he be mad.

He closes on me, I try to gain range, lock him up and offer the duel... He locks me up, closes right up and accepts, I hit him with web, scram and rails, drop a flight of Hobgoblins and try to claw a little distance for my rails to hit better.

He hits me hard with a volley of autocannons, an energy nosferatu, web and scram. My shields are stripped in an instant and I start overloaded repairer cycles as my drones and little rail damage eviscerate his shields, his armour repair is much more significant, I suspect one of the new ancillary armour repairers, but I keep trying to claw range as we are both at the limit of our armour, I try to build some transverse, allowing my repairer to be more effective against the incoming damage, but I'm out of cap, my scrambler burns out and afterburner melts, I'm waiting for the end as I prepare to warp my escape pod out. The moment never comes, the Rifter explodes... Instinct takes over and I lock the pod, no scrambler dammit, he's going to warp out, but instinct again takes over as I punch my rails into action and my drones follow... a dull thud as a corpse hits my Tristan's hull, nearly doing it in as it's venting atmosphere and fuel all over the undock lane of Rens' premier station.

I survey the damage, not quite believing my little Tristan survived that. He was quicker, more damage, better reps, more experience and a lot more skill points, but the best thing about this fight... 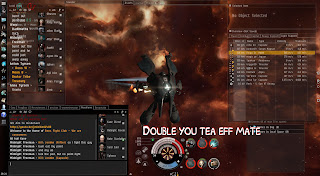 Even though I was on fire, had no tackle or propulsion, when I opened my combat log I was greeted with this, another addition to the Midnight Freeman Billion ISK Pod Club 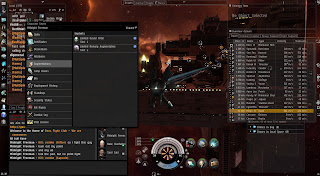 And all this with 3.5mil SP and some cheap learnin implants I got with the tutorials.


IN OTHER NEWS
Kane violences shinies 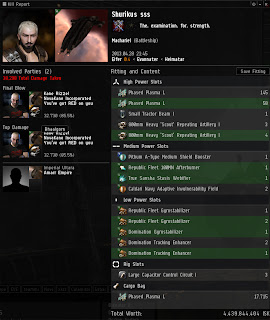 Given the riffie's damaged tanked I don't really suspect armor links, but the player's pedigree I guess so; impressive that you dropped him so fast with a low SP toon.

Sard, he is absolutely armor linked